The Florida Reef Tract (FRT) spans over 580km from the Dry Tortugas National Park west of the Florida Keys to the St. Lucie Inlet in Martin County, constituting the third largest barrier reef in the world. It is located along the northern side of the Straits of Florida that connect the Gulf of Mexico and the North Atlantic Ocean. The ocean circulation of that region is dominated by the Florida Current, which is an intense western boundary current that continues the Loop Current inside the Gulf of Mexico and, downstream, forms the Gulf Stream. Here, we try to estimate larval dispersal and connectivity of Montastraea cavernosa between the ~1000 reefs composing the FRT. We use SLIM2D with a mesh resolution ranging from about 100m near the reefs to 15km faraway from the FRT. 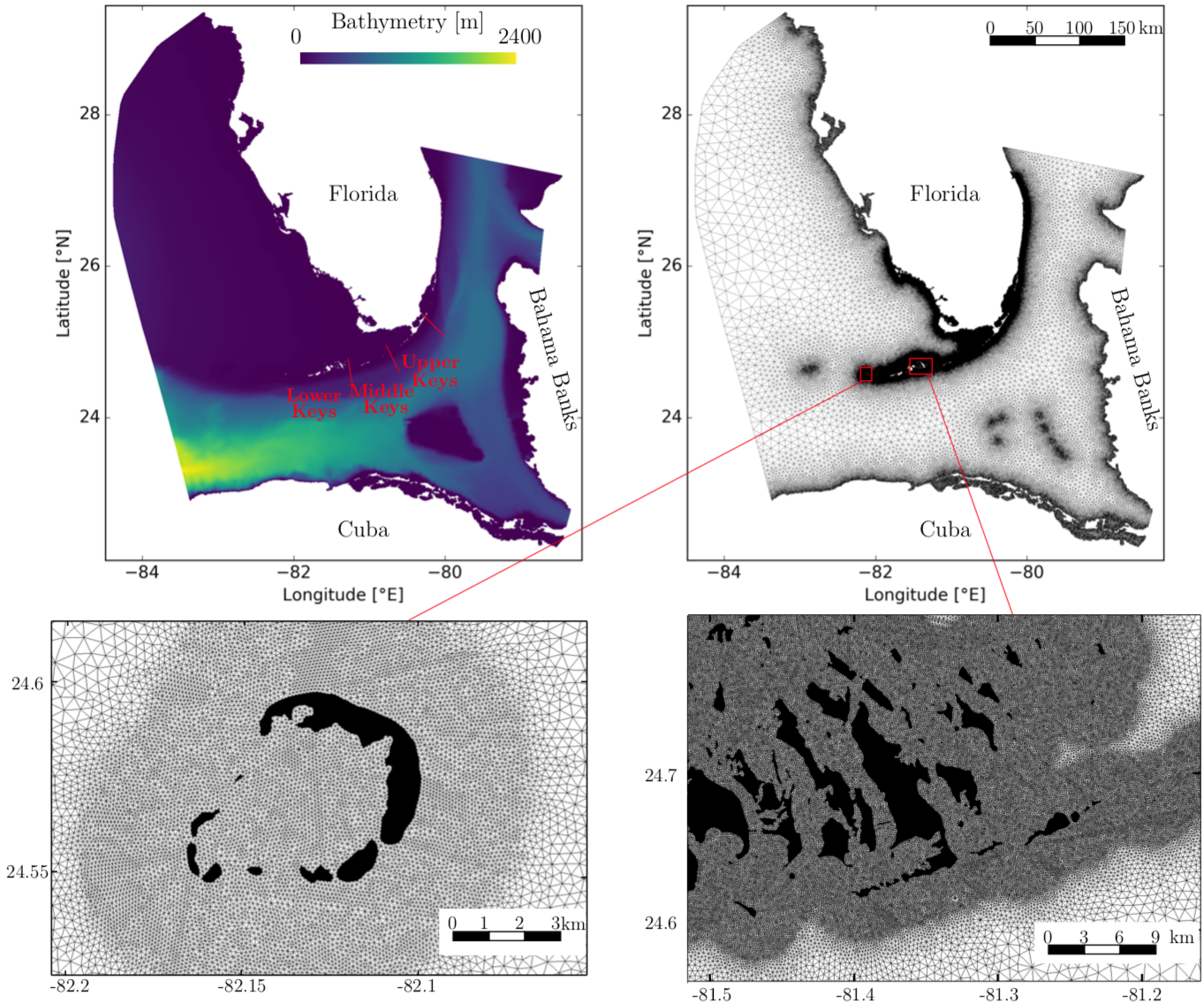 Using such a fine mesh resolution, we can explicitly simulate fine-scale details of the flow such as recirculation eddies and currents within the dense reef system in the Lower Keys that consists of many individual reefs with narrow passages in between. In the deeper ocean, SLIM is coupled with the large-scale ocean model HYCOM in order to correctly represent the Florida Current.

We then use the Lagrangian particle tracker to simulate the transport of larvae between all the reefs in the FRT. The larval dynamics is driven by the simulated currents and by experimentally-measured life history traits such as mortality, competence and settlement behaviour. We have seeded larvae on all the reefs composing the FRT in order to estimate the potential connections between them as would happen if each reef had the same coral density and enough room to accommodate all settlers. The video below highlights the fine details of larval transport in Lower Keys and shows that larvae can be transported by tidal currents from the inner-shelf to the outer-shelf region.

The Lagrangian particle tracker can also be used to simulate the transport of materials (coral mucus, sediments, pelagic organisms, etc.) potentially carrying the causative agent of the Stony Coral Tissue Loss Disease through the FRT. The connectivity results of the particle tracker are then coupled with an epidemiological model in order to reproduce the observed propagation of the outbreak in an attempt to deduce the characteristics of the (yet to be identified) causative agent of the disease and its potential vector.

Preliminary results and details about the model available at this link.